All parents have tough nights. Nights where we want to check out, nights where we daydream about another life. One that's potentially carefree and in a different lifetime. Mine is one where I live in a studio apartment on a beach, and I paint, and cook organic, and give freelance consultant advice to large corporations.  I buy brie and fruit and use crocheted bags at the market. I have time to meet intellectual friends and discuss climate change and supporting the arts in school.
Tonight I tried to get a spoonful of grape Tylenol down my 14 year olds throat. See, if I want a gummi version (compounded medication at a specialty pharmacy) for his headaches, if will cost me $80 a bottle. I don't know if his headaches are allergy related like his dad's when he was young, or if he has a visual strain that is adding to the pain, or if it's stress related. All I know is he is in physical pain. He's non verbal. He may never be able to explain these physiological feelings to me. But I keep playing the part of his personal physician, of specialist, as sort of a health investigator... The denials for coverage keep coming. They tell me it's a convenience for me to cover this formulary of over the counter medication. They tell me we cover capsules, pills, tablets, liquids. Yes, you do. And all of those have been thrown up on me. All of those attempts when he was small, and I cried as I held his body down while his fought me with all his might while I jammed the little plastic syringe down his throat. As he grew older, the multiple adults it took to take him to an appointment for antibiotic injections when he had strep throat. Yes, that was covered. I cannot hold him down now. Autism has sensory issues he cannot help. It's not behavioral.  He cannot stomach the texture. The bitterness and feel of pills do not allow his system to accept any form of medication. Only the gummies he finds palatable and can swallow.
Convienence. For me. Tonight I offered a spoonful knowing he was in pain enough to keep grasping my hand to place it to his forehead. Enough times to get tears in his eyes, pleading for help. The first spoonful he tried and spit everywhere, the second he grasped my hand with such force he broke my nail.
Later when I was texting my nail salon friend for the millionth time "need a fix again please", I thought about the force it takes to bend a nail backwards and the searing pain I could still feel. As I made the appointment I could still hear him loudly verbalizing and trying to settle in to bed. We have both cried, both said sorry, and both still at a loss. He's now taller, and stronger than I am. I tried to hold him and tell him it was okay. I tried to feel better when my husband told me that he would be alright. This isn't alright.
Posted by N.Haisley at 7:37 PM 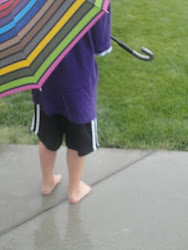